skip to main | skip to sidebar

Project Icarus is my personal project since I am told not to do too much sci-fi stuffs. Being a sci-fi fan, I need an outlet. Icarus is going to be an on-going project even after I graduate from FZD. This name is based off a mythology figure, the son of Daedalus who uses technology to escape. He made a pair of wings using feathers and wax. He gave specific orders to his son not to fly too close to the sun. But his son got carried away. The wings lose the wax to hold the feathers, thus, Icarus plunged into the sea. So my concept revolves around high tech stuffs in the future and definitely going to have tons of 'mishaps' from over reliance of technologies. 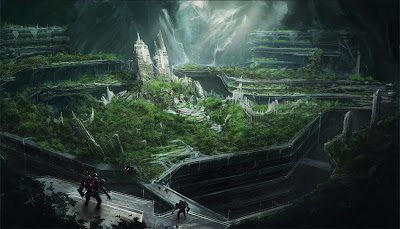 Portfolio website is up! Can take a look at my works there and I welcome all critics. Some quick paintings that I did from time to time. Try to keep it within 4 hours.

Most of these paintings I painted with an objective in my mind and most of the time I am pretty sure where they will fit in into my school projects.
Posted by Kai Ng at 11:51 AM 1 comment:

My batch's grad show is held together with our juniors from the 3rd batch. Gonna be held at FZD School of Design (200 Middle Rd, Prime Center, #16-01, Singapore) on the 12th and 13th of Nov 2010. Also to mention, my class blog is up with the help from our mentor Kingston. You can visit and take a look at our work there. FZD02

Did the banner for the class blog. Its been a year and it feels like a decade. Purposely choose band of brothers for the theme because I feel my class is really close to one another. 7 of us, went through all the hardships. Could be because I just watched cool films like Pacific and Band of Brothers. :/
Posted by Kai Ng at 11:36 AM No comments:

Kai Ng
I am a concept designer from Singapore. Since young, I have been strongly influenced by video games and all sorts of sci-fi shows. Studed in Fengzhu School of Design, learning from industry master like Fengzhu. Hoping to use the knowledge to create great games like WOW or involve in making movies. Currently a concept artist in LucasArt Singapore.